My Grand Embarrassment, But Now I Can Laugh

I can laugh now, but at the time, I was ready to die.

Setting: Paris, France; an elegant avenue in a trendy neighborhood.

Characters: Me, my niece Rose who was living is Paris for the year, and my sister-in-law Jan, her mother.

Time: A lovely fall afternoon following lunch at an American-themed restaurant (Indiana Cafe) where I had a taco salad. (I generally don’t eat American food while traveling but it was handy and we were cold.)

Background. I am allergic to soy, especially soy bean oil and lecithin. The main symptom is an atomic and uncontrolled bowel movement within an hour of ingesting. My intestines go into self-cleaning mode.

Within minutes of leaving the restaurant I had an immediate need to find a restroom. Luckily, Paris is famous for its self-cleaning public toilets and one was within striking distance. As I rushed up to the “toilette” a Parisian gentleman was just exiting and he waved, I thought indicating the toilet wasn’t flushing. I had no choice. I went in, closed the door and pushed the flush button two or three times as I whipped down my jeans and let the soy give me a Parisian Colonic.

My relief was short-lived, however. A female voice made an announcement in French. Then, she spoke English and said, to the best of my recollection, “Cleaning will commence in 15 seconds.” I was in a panic, not knowing how the cleaning process worked. But exiting the “toilette” was not an option at this point.

A countdown began and I held my breath, waiting for a spray of water. But it was not so simple. Apparently the “toilette” wanted me to leave before cleaning commenced. As I sat on my French throne, the door slowly slid open, and I was watching a well-dressed man crossing the nearby intersection. I’m not sure who was more aghast, me or Rose and Jan. Mortified hysterical laughter might be a better description of their reaction. The passer-by didn’t blink an eye. As I gasped “Oh, my God!” over and over, I yelled at Rose and Jan to stand in front of the door and block the view. When she could get words out between her laughter, Rose kept telling me to hurry up; I kept saying I was trying. To make matters worse, Rose was shushing a little old French woman who was nattering on at her in French.

Finally my colonic was complete. I adjusted my clothing and rushed out. We were all laughing and hanging on to each other as we hurried down the street, away from the “toilette” as fast as we could.

What I didn’t know was that the self-cleaning process takes place between users, and I should not have rushed in as the previous patron was departing. Live and learn they say. And don’t eat soy.

As you can imagine, I didn’t have the inclination to stop any photos before scurrying down the avenue. These snaps are from the internet. 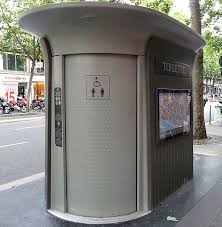 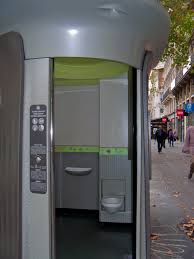 “The Sanisette is a self-cleaning public restroom, first pioneered in Paris. After a patron exits the restroom, “a wash cycle begins inside the toilet, and the toilet fixture itself is scrubbed and disinfected automatically.” The washing process takes 60 seconds.”

Buzzfeed’s 14 Bathrooms You Have To Use Before You Die

The visual created from your description of the door slowly opening was beyond mortifying … and unbelievably funny!

Just for the record … I’m quite familiar with those toilettes and I’ve always wondered what would happen …
Now I know!

Oh…my….so sorry to laugh at your expense…the best part is when you enlisted your friends to block the view.

We still laugh about it.

Oh Marie, you gave me such a belly laugh !! You poor thing. But thank God it happened in France. The Parisians would not even blink an eye …