Dilapidated entrance gate to road leading to Potomac Dell, a private home that at one time opened its grounds to the public, at no charge. The ad below describes all that it offered. The ad is from the Hagerstown, Maryland newspaper The Daily Mail, 23 May 1955, Mon, Page 2. The ad is the only information I could find about Potomac Dell so I can’t say when or why the property was abandoned. There is a large deteriorating house near the paved road. 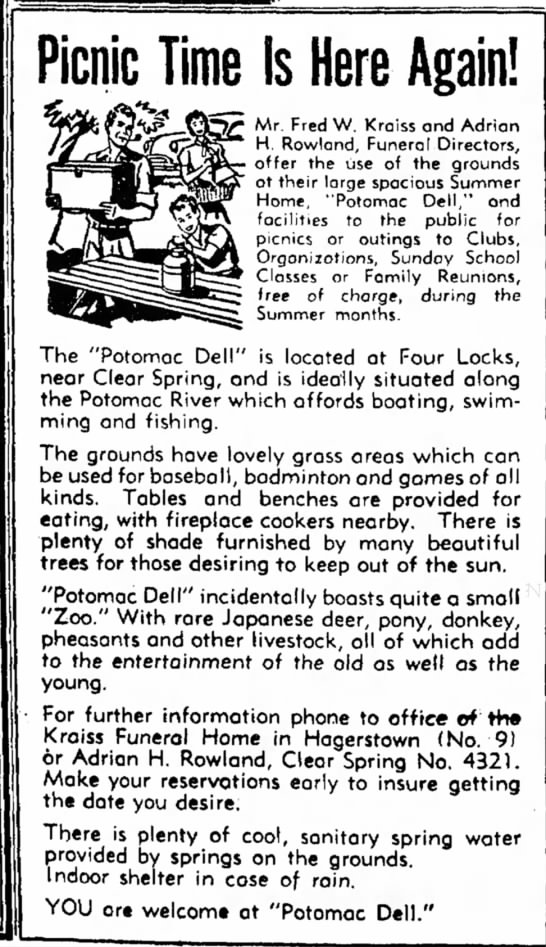 Returned to the Wild

Section of the C&O Canal in the Chesapeake and Ohio Canal National Historical Park, along Berm Road, near Hancock, Maryland

Trees growing in the historic Chesapeake and Ohio (C&O) Canal in the Chesapeake and Ohio Canal National Historical Park, along Berm Road, near Hancock, Maryland. By design, the 19th-century canal ran parallel to the Potomac River in the states of Maryland, West Virginia, and Virginia. The 185 mile canal moved coal, lumber, and agricultural products down from Cumberland, Maryland to markets in Georgetown, Virginia. Built between 1828 and 1850, plans originally called for the canal to connect to the Ohio River; exorbitant costs and construction issue resulted in the canal terminating in Cumberland. Goods began moving down the lower section of the canal in 1831. But even as canal construction continued, the newly expanding railroad system brought competition to the waterway. The canal’s best years in the early 1870s were followed by an economic depression and several devastating floods. After another flood in 1924, canal operations ceased and no further repairs undertaken. By then, the railroad had captured most of the regions trade.

In a way, though, the railroads  are responsible for the preservation of  the historic and natural features of the canal. In 1889, a flood forced the canal company into receivership, and the B&O Railroad bought the majority of the canal’s bonds. In 1938 the railroad sold the entire canal to the U.S. Government for $2 million, and it was placed under the supervision of the National Park Service. In 1961 President Eisenhower designated it a national monument, and  in 1971 Congress authorized the C & O Canal a National Historical Park. Check out the Park’s website for information  walking and biking trails, information centers, and other activities in the park.  The Western Maryland Rail Trail runs along the canal in this area.